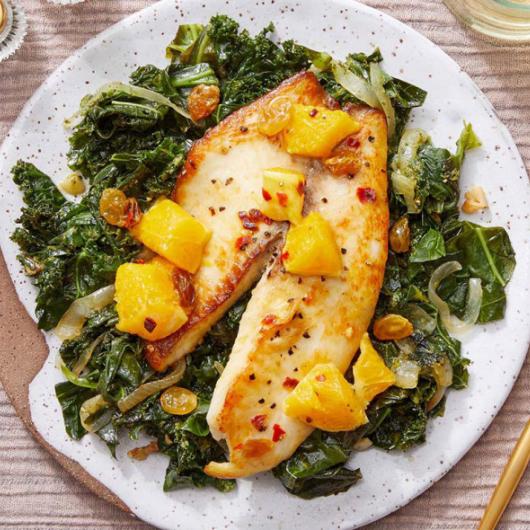 Prepare the ingredients & make the glaze: Wash and dry the fresh produce. Halve, peel, and thinly slice the onion. Peel and roughly chop 2 cloves of garlic. Combine in a bowl. Separate the kale and collard green leaves from the stems; discard the stems, then roughly chop the leaves. Combine in a bowl. Halve the orange crosswise. Squeeze the juice of one half into a medium bowl. Peel and medium dice the remaining half. To the bowl of orange juice, add the diced orange, raisins, and as much of the red pepper flakes as you’d like, depending on how spicy you’d like the dish to be. Season with salt and pepper; stir to combine.

Cook the fish & serve your dish: Meanwhile, pat the fish dry with paper towels. Season with salt (optional) and pepper on both sides. In a medium pan (nonstick, if you have one), heat 2 teaspoons of olive oil on medium-high until hot. Add the seasoned fish and cook 3 to 4 minutes, or until lightly browned. Flip and cook 2 minutes. Add the glaze (carefully, as the liquid may splatter). Cook, frequently spooning the glaze over the fish, 1 to 2 minutes, or until the fish is coated and cooked through.* Turn off the heat. Serve the finished greens topped with the cooked fish and glaze. Enjoy!

*An instant-read thermometer should register 145°F.